The Town Obelisk is one of six large black structures found on the island in The Witness. Its purpose is directly tied to that of the many hidden Environmental Puzzles, and solving any of the nearby puzzles will light up a corresponding symbol, and reveal the symbols of other nearby puzzles. 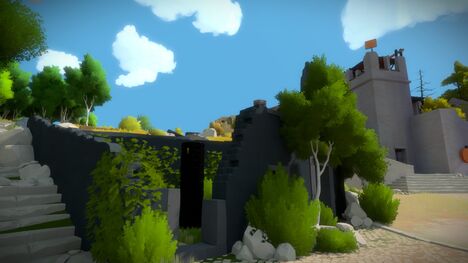 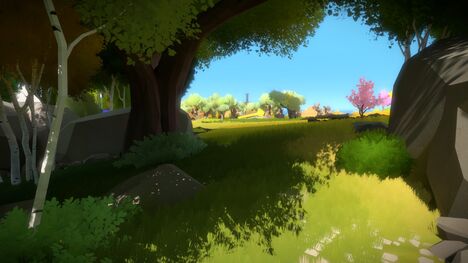 From the town, head back towards the Entry area and Glass Factory to find a disused excavating machine. Stand far back enough until the piece is lined up to trace. 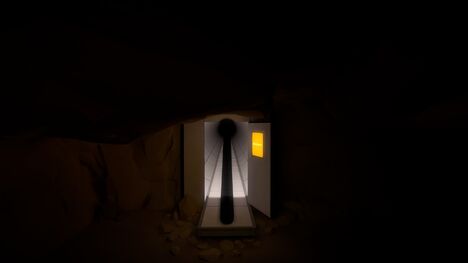 As soon as you leave the first corridor in the beginning of the game, turn around after opening the door and notice the floor you came in on. Back up against the wall to align the top piece with the corridor to trace the symbol. 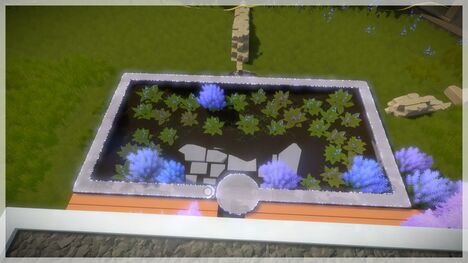 Once you've opened the main gate to exit the Entry area, head down the road and hang left against the entry area's walls to find a path onto the ramparts. Move around to the back to walk upon the structure in the middle, and look down into a garden on the right, and trace the symbol like a sqaure. 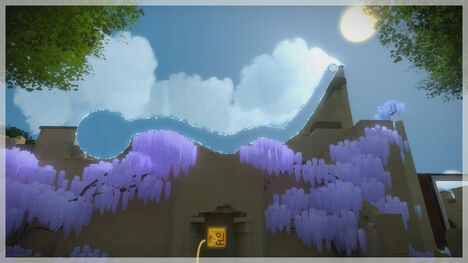 Coming right out of the Entry Area tunnel, keep walking straight toward the first visible puzzle and look upwards to see the clouds forming a puzzle with the sky that you can trace. One of the trickier environmental puzzles in this area, you might notice a line of flowers upon the wall as you first exit the entry tunnel. however the line ends, and another trail of flowers is too far away to connect. What you need to do is activate a hidden floor puzzle, by way of a nearby pillar. 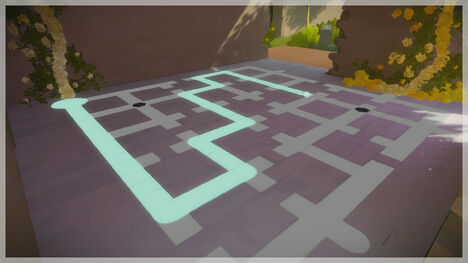 The last tricky part comes from the fact that the floor puzzle turns blue when completed, and does not match the color of the flowers. In order to complete the environmental puzzle, you'll have to deliberately fail by bypassing the first black hexagon required to pass the puzzle. Failing the puzzle will turn the line yellow, and you'll now be able to trace a path between the flowers. 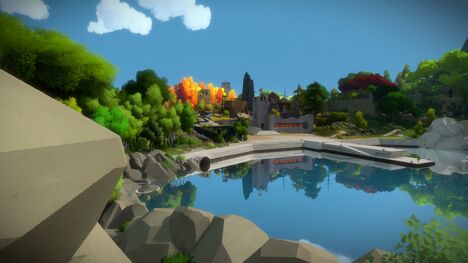 As you walk down the path leading out of the Entry Area, keep along the right side of the path to find a small alcove that overlooks the waterside area of the Town. From here you can trace the sewer drain and the path that wraps around the pier.

Similarly to Symbol 5, the next symbol is found leading from the storm drain. However, in order to get this one you have to be riding the boat. This symbol is a continuation of Symbol 5 as it curves around the dock. If you look closely you can see its end in the above photo. 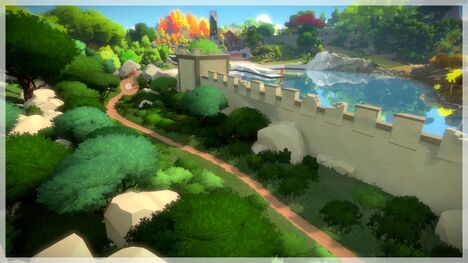 Once you leave the main gate of the Entry Area, walk up the path and go left to find a hill letting you onto the ramaprts of the fortification. Go left along the ramparts to climb the highest point by the gate and look down upon the path to the end which resembles a circle.

Spoiler Warning - The following puzzle unlocks a huge secret - read on at your own risk!

Watch the video to see how to solve the puzzle

<spoiler>This puzzle can only be solved in one of two ways. The first, and easiest - is to simply look above the locked gate at the end of the Entry area and align the power grid with the sun above. Do note however that tracing this puzzle will unlock a secret area replacing the exit, trapping you into this path until you restart the game.</spoiler> 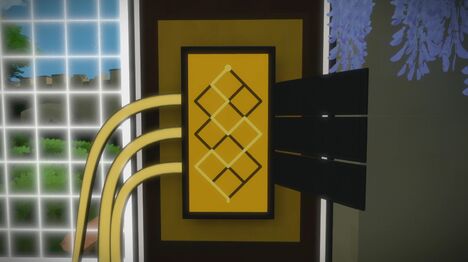 <spoiler>However, it is possible to reactivate the gate once you've gone past, by returning to the puzzle panel and using the above method to re-solve and relock the gate.</spoiler>

To solve this series of puzzles, you'll need access to the boat. To do so, head down the coast past the Town area to find an abandoned dock with a panel in the shape of a boat. Once solved, the boat will raise up and you'll be able to send it where you please by using its map. Have it sail from the Town to the Glass Factory for these next puzzles.

As you glide past the Entry Area fort, look on the side for a dark grey starting point that climbs up and around the ramparts. Follow it for as long as you can until you can go no further, and let the boat's natural progression combine the towers with the line so you can keep tracing along the edges. You'll need to be quick in a few places to trace before the line breaks again. As you get to the last side of the fort, wait until the very end as the last tower overlaps and quickly trace all the way left.

Just like the above symbol, you'll need to use the boat to move from the Town to the Glass Factory. And just like the symbol above, the puzzle hides within the Entry Area's walls. However, this puzzle can be found in the reflection along the water. This doesn't change much aside from having to carefully dodge from rocks that might interefere with the tracing. Near the end, be sure to take the lower path, as the line will be broken up by the rocks. 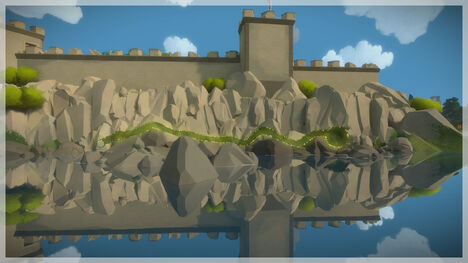 You can find this puzzle also by using the boat, but it may prove trickier than the previous ones. The puzzle is cleverly hidden among the grass cropping out from the stones along the water, but you'll need the perfect unbroken line to finish it. Since the boat moves fairly fast, you may end up having to stop the boat at just the right time (just look back at the map and click on the large circle to stop the boat. 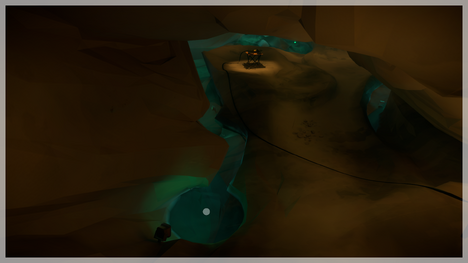 This symbol is in the last area of the Challenge tunnel, just before you reach the record player. 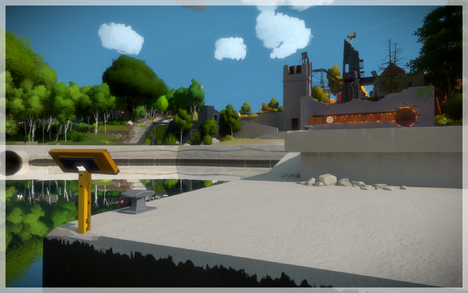 You must first solve the puzzle on the orange shipping crate to open the crate's door. Then you can complete this puzzle while on the boat. 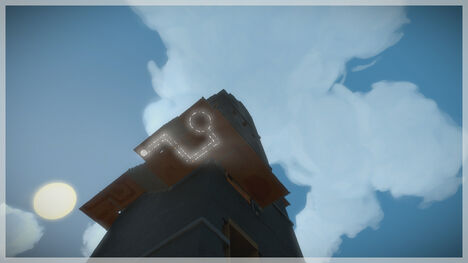 The first four symbols can all be found at the tower near the center of the village. Approach the tower from the Windmill and large pit in the ground, and look up at the walkways and align them to reveal the first puzzle. 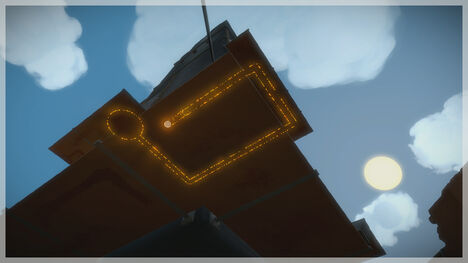 The second symbol at the tower can be found along the right side from the previous position, on a series of lower walkways along the tower. Again, you'll have to align multiple walkways above you. 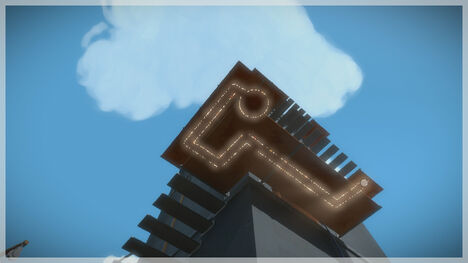 The third symbol can be found opposite from the first one, on the other side of the tower and starting at the top of the first set of stairs along the tower. Look up to align the paths and form the path. The last symbol on the tower is found just to the left of the first one, and to the right of the previous symbol - which combines the second and third walkways along the tower.

First, go into the building with the orange container on top and set the lighting to red. Then head outside on top of the tan building and look back at the container: 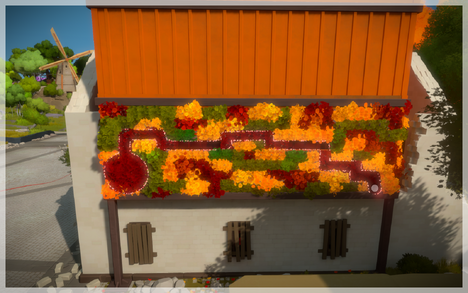 Next, go back in the container, set the lighting to green, and walk back outside to the left: 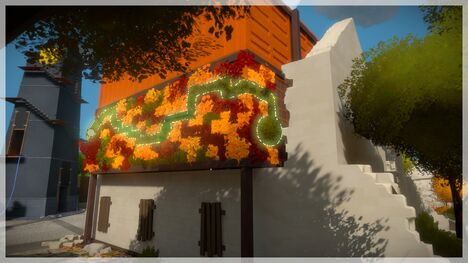 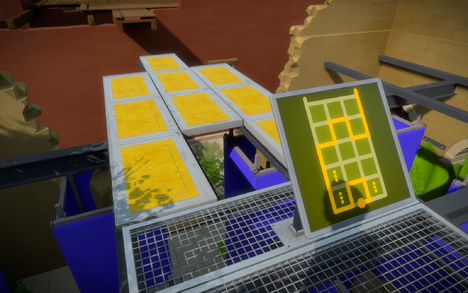 This symbol is a little tricky and requires multiple steps. First you need to activate the desert laser before proceeding. Once you do that, head to a spot near the waterfall and monastery as shown in the picture below. If you look to the sky you'll see a dark grey cloud. If you stand in the exact right spot the symbol will form in the sky with clouds.

Alas, the grey cloud will prevent you from completing the symbol. This is where the desert laser comes in. Head into town where the rotating reflector for the laser is. Oh no, the grey cloud in the sky is mocking you.

What are you going to do about it? Shoot it with a laser of course! Set the reflector to the below position.

Presto! Now it's the same as the other clouds. Head back to the position where the symbol formed.

Now you can trace the outline without interference. 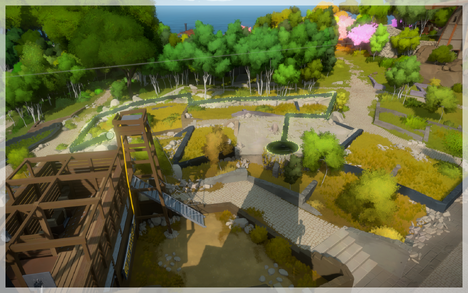 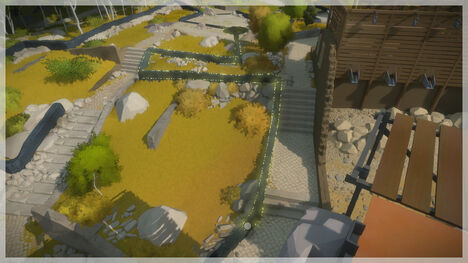 For this symbol, you'll need to get some height on the pit in the middle of town. Look for the two white buildings near the waterfront and find a set of stairs and scaffolding leading up to a tower that overlooks the town. From here you can make out the pit that starts the puzzle - but from this line of sight you'll only be able to trace in one direction. 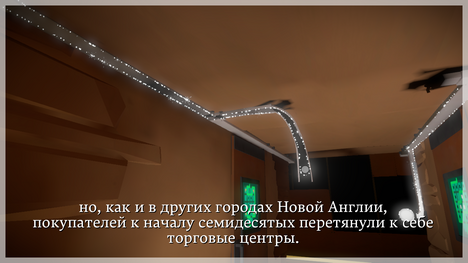 To get this symbol you must start the fourth video and quickly position yourself as shown. Both doors must be open. Start the puzzle while the moon is shining, and then wait until the video almost ends (about an hour). At the end of the video, the moon will be shining on its edges and this is the moment when you have to finish the puzzle. Here you will understand the meaning of patience.

All of these symbols rely on the video from the Entry Area Vault, so have that unlocked first. Head down to the theater. Next, drag the movie's line (which acts as a slider bar for fast forwarding/rewinding the video) to about this position or slightly further:

Next, and this may take a couple of tries, quickly line up the half circle on the right side of the window with the upper right circle on the page in the art book: 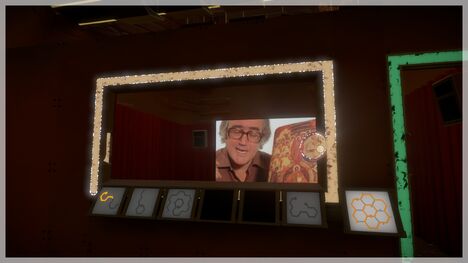 Then, drag up. left, and down the window frame.

In the next few seconds following, you can then line up the doorway's half circle (just inside the left of the frame) with the green circle in the video: 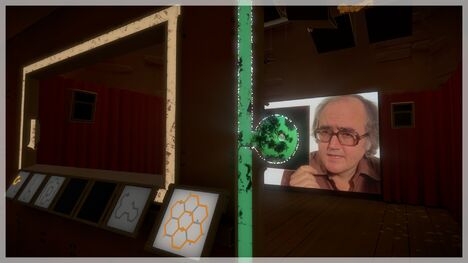 Then drag up, right, and down the doorframe.

(Note this next one requires having the game finished and the challenge area unlocked, because you need the tunnels to be unlocked to get to where you need to be.)

Finally, reset the video close to the beginning. Go ahead and head on to the catwalk above the theater:

Make sure you position youself so that the leaves on the hanging wires line up with the shape we're making here (demonstrated in the right picture above) or you won't be able to get past them. As the same scene as before rolls by that contains that book with the pictures, this time the lower left circle in that same picture completes the circle when you look over the edge at the screen: The last symbol requires having to access to video # 3. Once you have it, set the timer to this position. 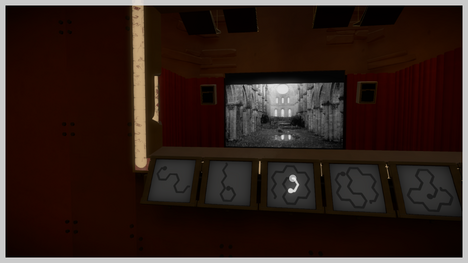 Now go around to the back of the theater screen. You should now see the last symbol. 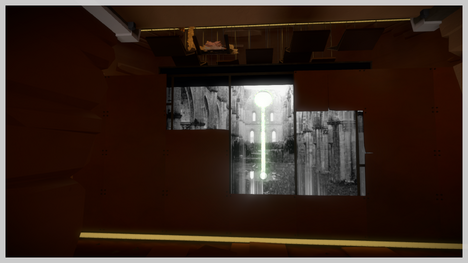