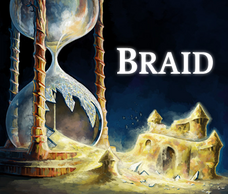 If you've entered the Glass Factory, you may have noticed a number of sand piles near the back of the workshop. At the far end is a hastily made and crumbling sandcastle. This sandcastle is actually a reference to the art from Braid - Jonathan Blow's other critically acclaimed game.

To solve this canine conundrum, travel to the island's town, which is down the road and to the right of the Entry Area. Once at the town, head down to the water's edge and head back in the general direction of the Entry Area until you find a small path along the rocks. The path leads to a dead-end, but just behind the bush you can find a statue (or frozen remains?) of a small dog on a tiny pillow.

The Witness is full of many strange and mystical secrets, some of which are built into the island itself. Often times something may look odd from one angle, but come together somewhere else to form something amazing. These Easter Eggs can be found all across the island in the most unlikely of places. 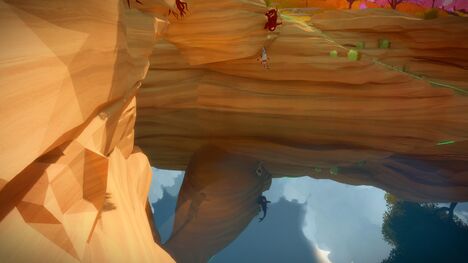 The waters of Symmetry Island are known for being incredibly reflective. So reflective in fact, that at first glance the appear to be home to the island's only living creatures - a pair of Koi fish. At closer glance, it becomes apparent these fish are in fact reflections of the twisted tree roots jutting out of the rock from the red trees above. 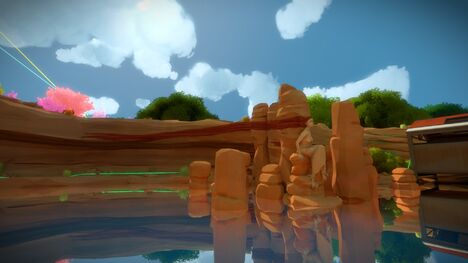 If you go around Symmetry Island by boat, you will notice the statue of a hawk-footed woman on the rocks. Her hair is beautifully red though - and continues along the rocks behind her!

In the Shady Trees area, you can find an odd looking tree branch with some cloth draped over it. Its branches almost give the quality of hands reaching out. As it happens, the sun is shining on it through a gap in the castle wall, creating a beautiful shadow art of a lady reclining against a wall onto the giant stone behind the tree. 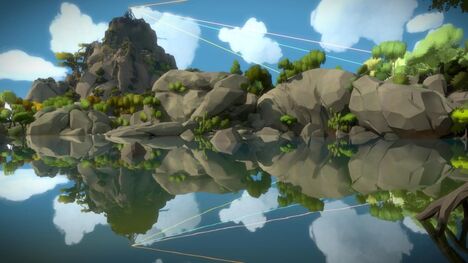 When on the docks at the far end of the Tree House area, you can take a turn to an end of the boardwalk that looks out across the bay at the large rocks and mountain beyond. However if you look closely along the water's edge - you can find that the rocks take shape to form a perfect symmetrical image of a person kneeling with their hands out in prayer. 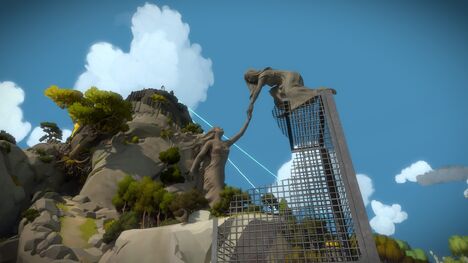 You may have seen the figure carved into the mountain with her hand outstretched, but what is she reaching for? With a little perspective the answer becomes clear. Head down to the dock at the Color Swamp to find a statue on top of a broken cage with her arm reaching down. You can look up to see them holding hands. 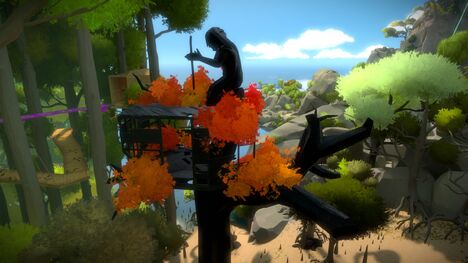 When in the Tree House area, you may notice the blackened tree that looks as if it was burned. When you rotate your view, the tree looks to be ablaze by its own leaves, the fire started by a figure atop the tree using a rod. 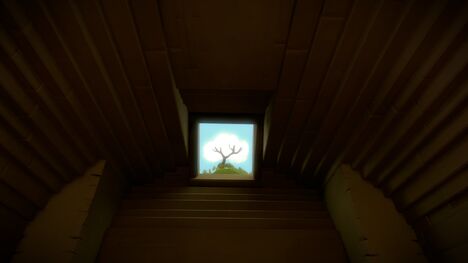 When in the very first vault, the center of attention will obviously be your first briefcase and the strange puzzle solution-looking paper you find inside. However if you take a moment to look up in the right position, you'll see this little piece: a tree with a cloud for leaves. 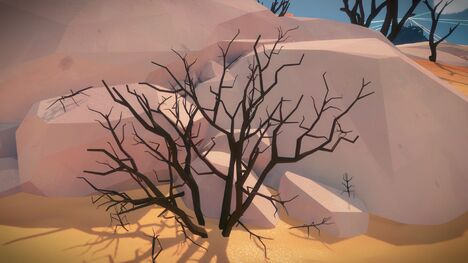 Little bug figures made of twigs appear to be crawling in and around the bush on the edge of the Desert area. 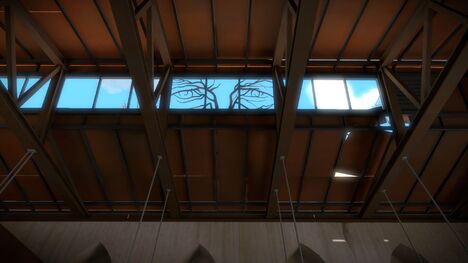 When in the bottom of the factory from the Quarry, if you feel like someone is watching you, it's probably because there is...

The Angel's Wings and the Crown and Sceptre[edit | edit source] 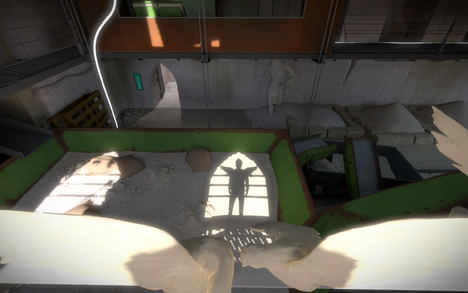 In the Quarry, two birds statues perched on the catwalk's railing in the main building cast this heavenly shadow.  When the player stands in just the right spot in the window, the combined shadow creates the impression of an angel. 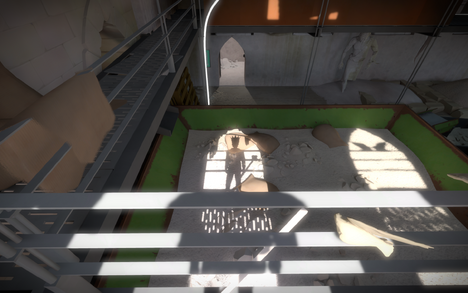 In the other window, the shadow can be aligned to resemble a monarch holding a sceptre and wearing a crown. 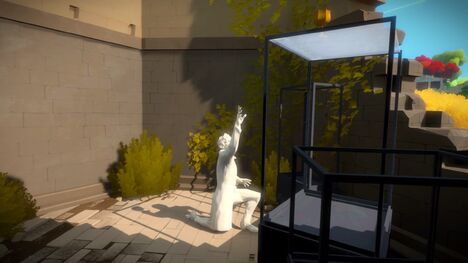 On the Peninsula, a man is reaching for the grail. His shadow is holding it already. 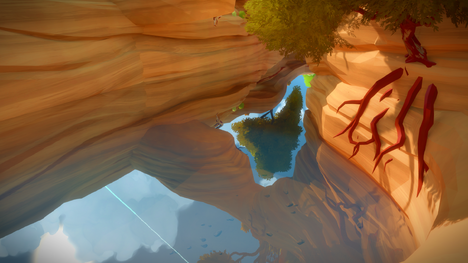 On Symmetry Island, there is a reflection of a tree that can be seen to fit perfectly within an arch of rock.

By looking out a series of holes in the side of the Tree Temple towards the laser plinth, you can see the evolution of a woman into an angel.

By looking through a bush towards the Tree Temple laser plinth, you can see a long boat. 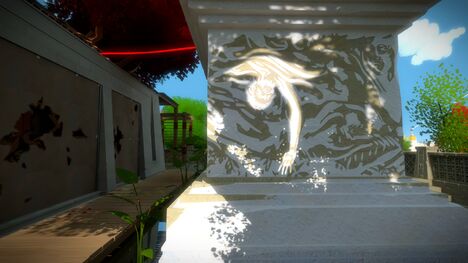 A shadow cutout reveals a drowning man on the laser plinth of the Tree Temple. 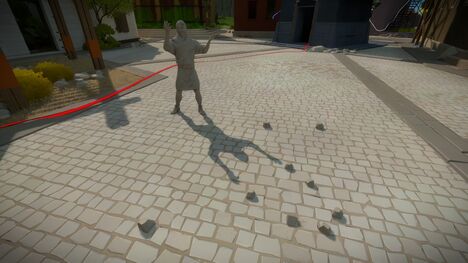 In the Village, there is a statue of a man with his arms stretched out to the sky. Its shadow reveals its true profession - a juggler! 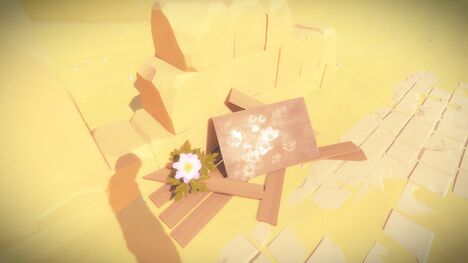 Near the Desert Ruins, a metal plate shows reflections of the flower next to it when the sun shines on it. 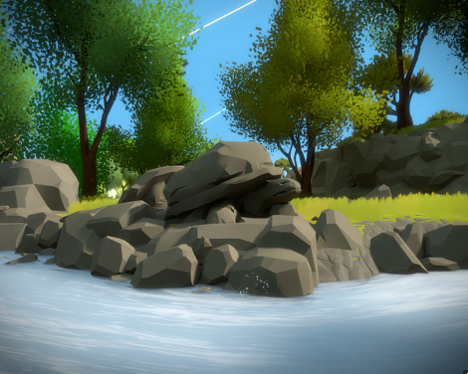 Near the river between the River Obelisk and the Jungle some rocks look like a turtle. 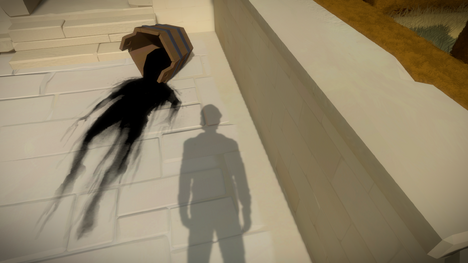 On the Fortress wall, a spilt bucket forms a human figure. Just a little creepy...

Crocodile in the Swamp[edit | edit source] 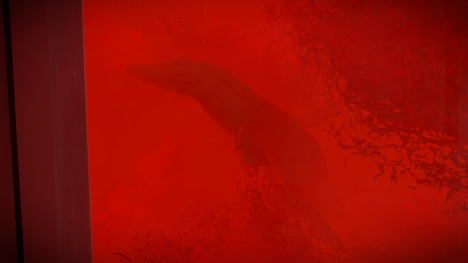 Down the first set of stairs in the Swamp (the red room), there is what looks to be a crocodile.

The shadows of the statues in the Quarry form the common ape to man transition. 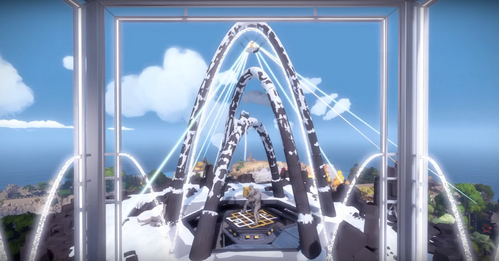 During the ending in the elevator, the last white border fades away exactly when its shape matches the arch on top of the mountain.